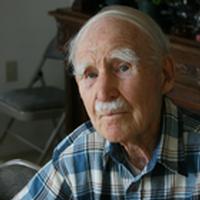 Wolf G. Bauer, 103, former resident of Anacortes Washington, died on January 23, 2016 at Hearthstone Adult Family Home on San Juan Island. .He was one month short of his 104th birthday. Wolf was born on February 22, 1912, the son of Hubert and Elsbeth (Hasbrouk) Bauer. Wolf had a strong connection with San Juan Island. He worked at the Roche Harbor Lime and Cement Company from 1936-1939. He also helped build and served as a counsellor at Henderson’s Boys Camp on Westcott Bay. Wolf was an avid outdoorsman. Born in the Bavarian Alps, he had a deep love for skiing and climbing. Recognizing the need for a more technical mountain rescue team, he helped found the Mountain Rescue Council and was president of it for the first five years. He taught courses with the Mountaineers and boy scouts. He also became an avid foldboat /kayak athlete, training others and taking long trips up the west side of Vancouver Island. He created the first kayak river ratings as well as creating touring maps of Western Washington Rivers. He helped organize the Washington Foldboat Club which became the Washington Kayak Club. He also founded the American Whitewater Association. His kayaking experiences led him to a career change, from Ceramic Engineering to what he called geo-hydraulics, the study of water’s effect on the land. He became a shoreline management consultant and worked in the San Juan Islands as well as in Canada and other parts of the coast. He worked with the Department of Ecology and Fisheries in cataloging and understanding the water dynamics of estuaries, rivers, and shorelines and, with dogged determination, saved the Green River Gorge for recreational purposes. He was a noted conservationist, environmentalist, ceramic engineer, mountaineer (skier and climber), kayaker, and shoreline management consultant. Wolf helped found the mountain rescue organization in the Washington Cascades. He also, through dogged determination, helped protect the Green River Gorge. Wolf was preceded by his first wife, Harriet Woodward Bauer and his son Laurence Bauer. He is survived by his sister, Friedl Ney, his twin granddaughters Sara and Laura Bauer, his daughter in-law Ingrid Fabianson, and one son. The family wishes to acknowledge the caregivers at Hearthstone, where Wolf spent his last two years: Darlene Eames, Stacy Line, and Marianne Kleine, thank you.. In lieu of flowers, donations may be made to the Friends of the San Juans in Friday Harbor. A small gathering will be held at a later date. Arrangements are in the care of Evans Funeral Chapel and Crematory, Inc., Anacortes, WA and the San Juan Islands. To share memories of Wolf, please sign the online guest register.